With the main purpose of raising money for a number of local and nationwide charities, a group of our employees took off last weekend on the famous coast to coast bike ride while also testing our a customer product, Helmet Angel. 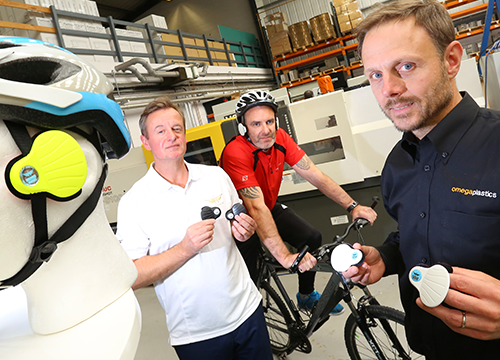 David Crampton, director at County Durham based Hanaido and creator of the Helmet Angel, invited our team of cycling enthusiasts to trial his ear defender product as they took on the renowned ride last weekend.

Designed to enable cyclists what’s going on in their surroundings more clearly by blocking out wind noise, the Helmet Angel is a wind-deflecting shell that attaches to the strap of the cyclist’s helmet. The product’s unique design also helps to combat the earache that many cyclists suffer during longer rides.

A keen cyclist himself, the idea for the Helmet Angel came to David when he was forced from his bike during a ride back in 1992 when a truck came alongside him at close range.

“I didn’t even hear it coming!” David explained.

“I was cycling downhill on a stretch of country road when a truck which was trying to overtake me suddenly appeared at my shoulder. Because I hadn’t hear it coming, it spooked me and caused me to move over onto the gravel at the side of the road, at which point, I lost control of my front wheel and fell onto the bank side.

“The truck itself never actually touched me, but the fact that I didn’t not hear it approaching until I caught sight of it alongside me caused me to fall.

“At the time the incident happened, I was working at a carpet factory where you had to wear earplugs while on site due to the noise levels. I began adapting these earplugs to try to create something that would deflect wind noise while riding my bike. It’s not until I became a father to my children, Hannah and Aidan, who live in Holland and cycle everywhere that I decided to press on with the idea and create the Helmet Angel.

“My hope for the product when it comes to market later this year is that it will bring more awareness to listening. Cyclists should always be aware of what is happening around them, but most especially behind them, so that they can react quickly and efficiently to road traffic, commands and warnings.”

The Coast to Coast challenge saw seven of our employees cycle 137 miles from Whitehaven to Tynemouth across three days and was the perfect endurance test of the Helmet Angel’s usability and effectiveness.

To discuss your project requirements

David first heard about Omega Plastics after his flooring business supplied some carpets to the company’s chairman, Chris Thompson.

“I’ve had ideas for products before but this is the first one that I have actually actioned,” David said.

“Omega Plastics has helped me every step of the way, from the very early moulding stages right through to the assembly and dispatch process.

“The team has provided very good, very patient support and has been invaluable to me when detailing the process and possibilities for the product.

“Looking to the future, I am keen to develop the Hanaido brand and the Helmet Angel product further to try and address safety issues within other activities that require participants to wear a helmet, such as skateboarding, scootering or equestrian sports.”

“It’s not very often that we have the opportunity to test products that we have moulded in their intended environment, so it was incredibly kind of David to allows us to test the Helmet Angel for ourselves during the Coast to Coast.

“The Helmet Angel was absolutely great. We experienced a lot of high winds and driving rain during the ride, especially when cycling over higher ground, and the Helmet Angel really helped to protect our ears and aid our hearing. This was beneficial not only for hearing traffic, but also for communicating with other riders.

“We were delighted to support David at Hanaido with the development of his fantastic product and we look forward to helping him with other projects in the future.”

Overall the Coast to Coast ride was a great success and we managed to raise over £1,000 for our chosen charities. 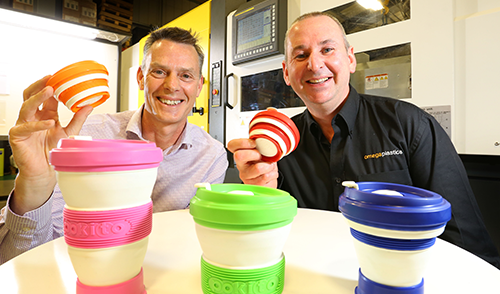 Saving the planet one paper cup at a time, the future is looking through for Andrew Brooks, investor of the Pokito collapsible cup. In November 2016, Andrew, inventor and company...

Business is booming for Cumbrian entrepreneur and Omega Plastics' customer, Sally Phillips, inventor of the ‘Chimney Sheep’, a unique and environmentally friendly draught excluder which prevents heat loss from open...

Giving back to Charity with The Omega Group